With thousands of verified 5-star reviews, what is it about the Tuski Water Flosser that's making everyone want one? 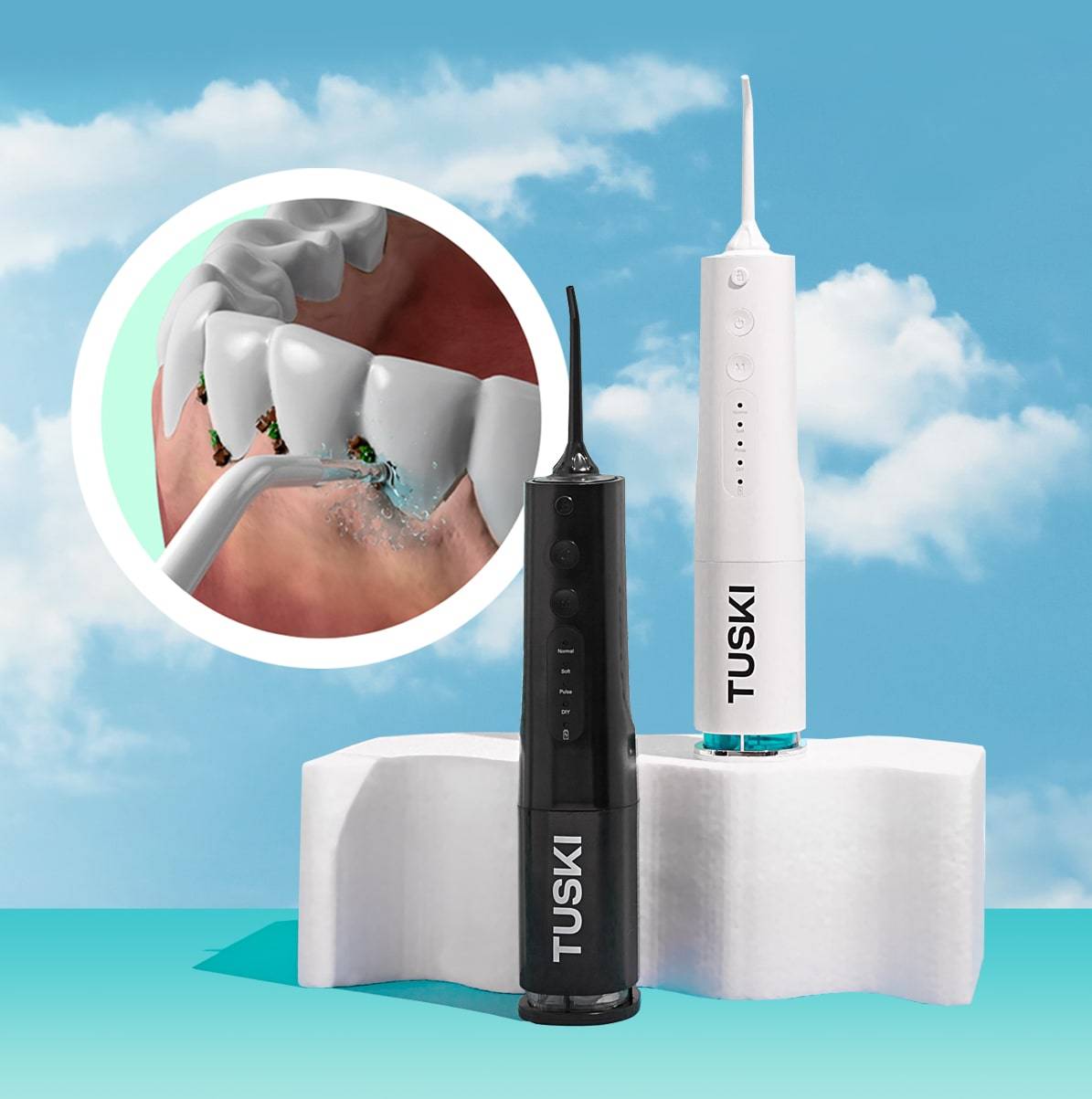 Consumers all over want to get their hands on the Tuski Water Flosser. But why...?

“I knew it was important for good health, so I tried to do it now and then, but it was just so boring and painful.”

“I also tried using brush flossers, but my teeth are just too tight and even the smallest brushes wouldn't fit” he explains.

“It got to the point where I was so fed up with flossing that I just stopped doing it all together.”

“Soon enough, I noticed that my gums had become sensitive and inflamed, to the point where it would be painful to even brush my gums with my toothbrush” he says.

“That’s when my brother told me about the Tuski water flosser he had been using for months. So I decided to give it a shot, and I'm so glad I did".

"After using the Tuski Water Flosser for one week, my gums stopped hurting and the sensitivity went away. My teeth felt really clean and I could even reach the ones at the back which I could never reach with regular floss.  My wife's also been saying how much fresher my breath is too which is a bonus!"

"I also bought one for my daughter who can’t use floss because of her braces, and for my wife who has bridges. "

And Mike's story isn't the only one. Thousands of people are buying Tuski Water Flossers for their friends and family.

"I've used my Tuski for the past 6 months and my teeth have never felt cleaner. I also bought five of them to use as quick last-minute gifts for my family. They're going to love them!"

With thousands of verified 5-star reviews, what is it about the Tuski Water Flosser that's making everyone want one?

Tuski started creating huge waves on social media with their super high-quality Water Flossers and now they've become one of the fastest growing Water Flossing brands on the market.

Below are some of Tuski's game changing benefits that make it one of the most popular products of the year.

It's super easy to use 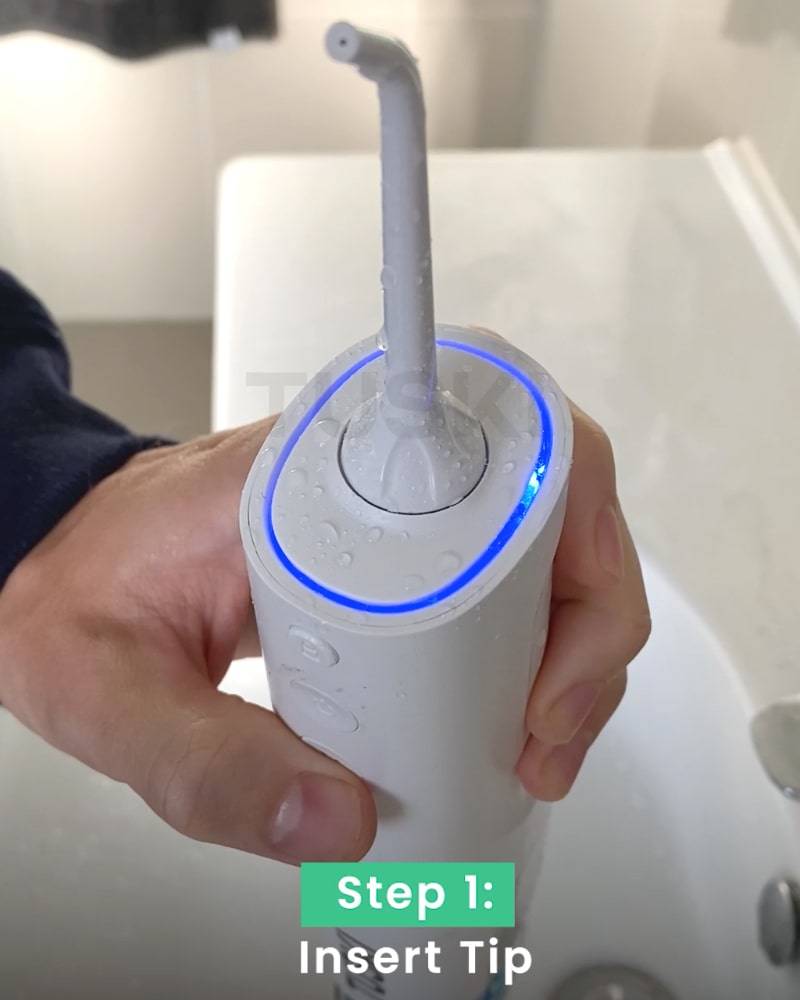 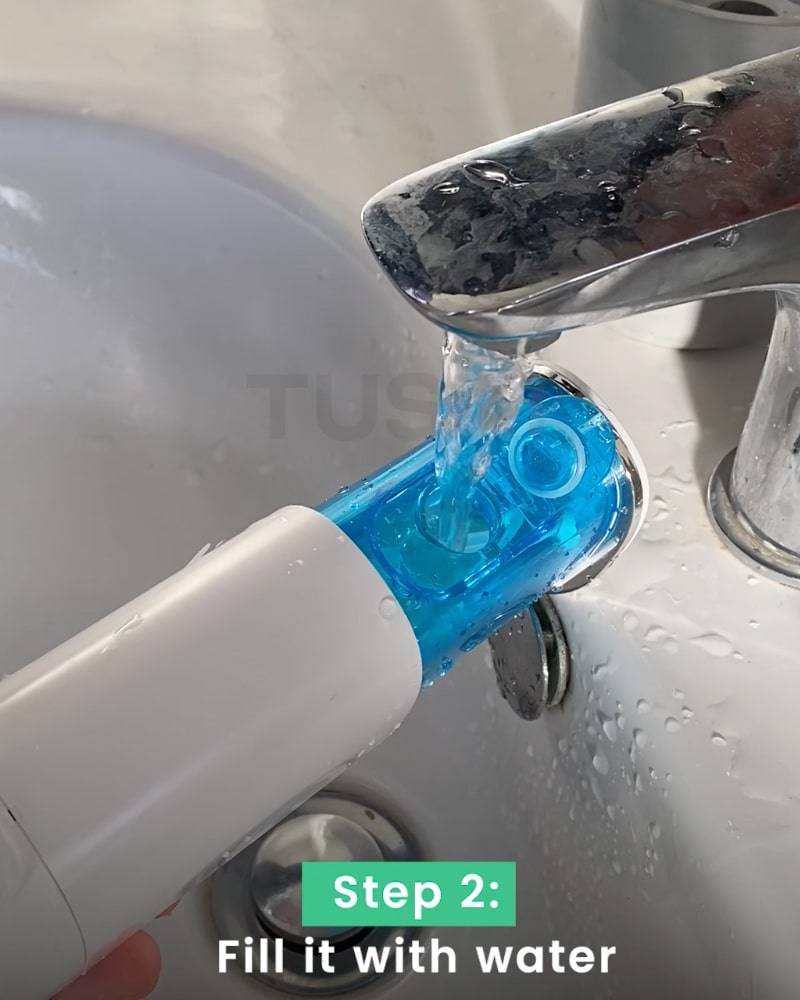 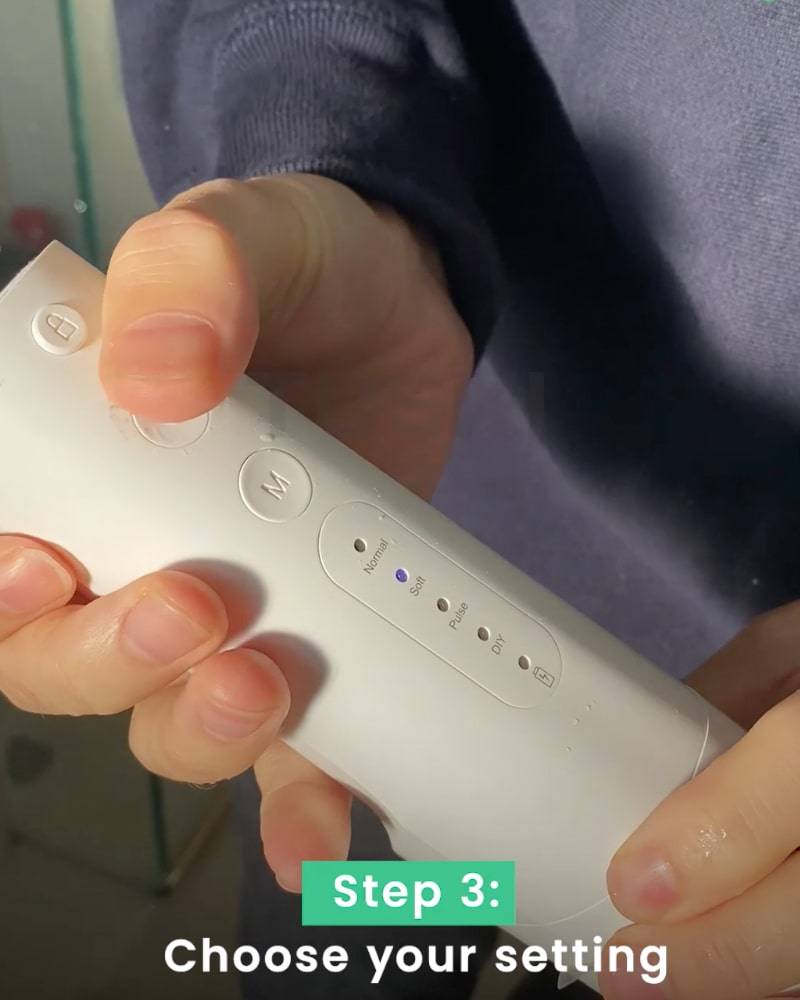 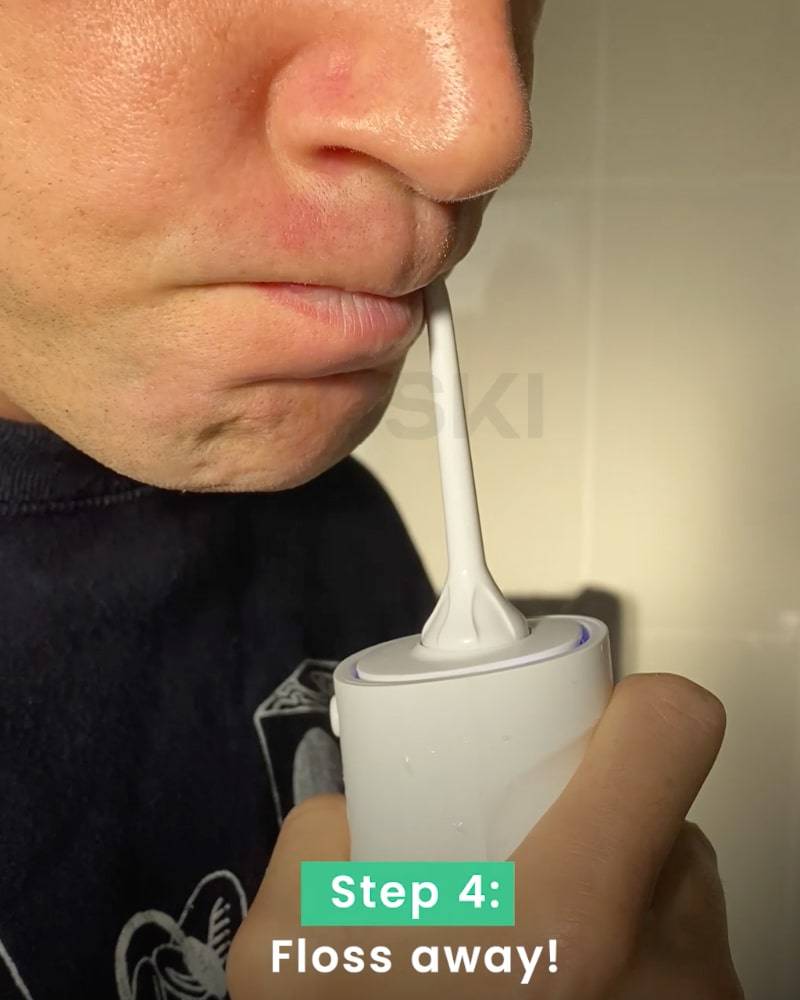 The Tuski Water Flosser has a flexible head that can reach all corners of your mouth, especially where string flossing can't.

There are also 3 different water pressure settings you can use. It's recommended to first start using the lowest pressure, and then you can gradually increase the pressure as you get used to it.

The best thing about it is how compact it is, so you can take it with you on the go, to the office, the gym or on travel. 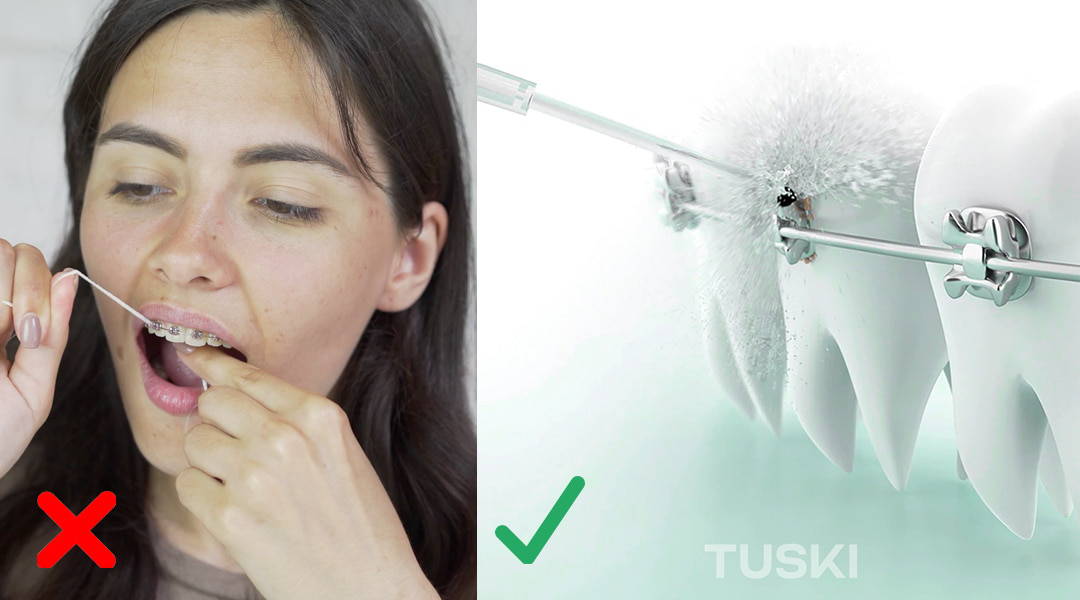 The Tuski Water Flosser uses a high pressure water stream to blast away food particles and plaque in areas of your mouth where traditional string flossing can't reach.

A study published in the Journal of Clinical Dentistry reported water flossing to be 29 percent more effective than traditional flossing¹.

All it takes is 30 seconds a day 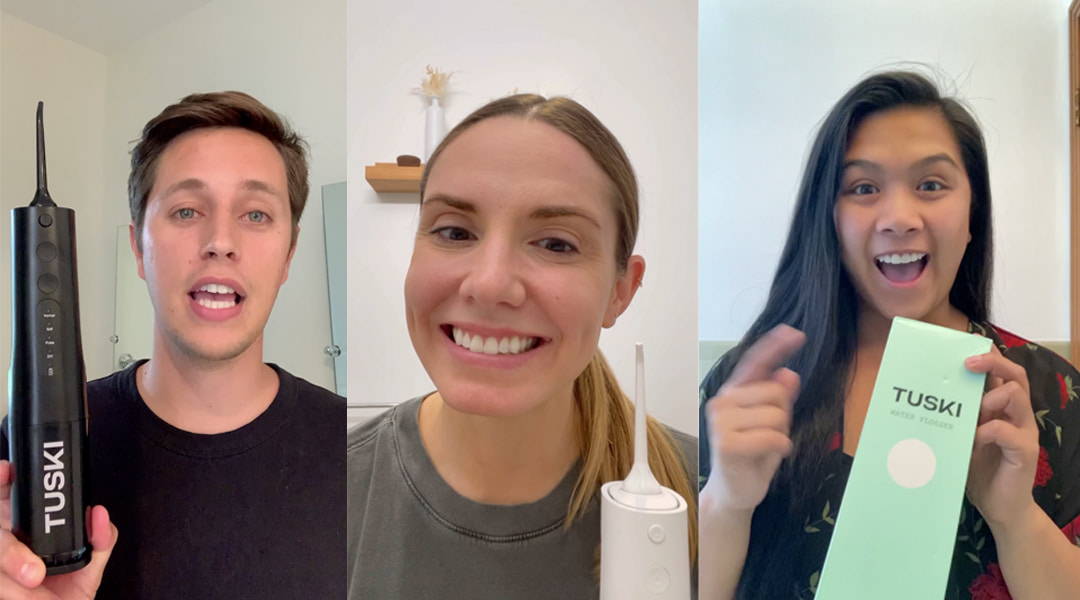 No more slaving away for 15 minutes with string flossing...

Tuski turns a time consuming chore into a fun part of your everyday. You can finish flossing as fast as 30 seconds. That will certainly put a smile on your face! 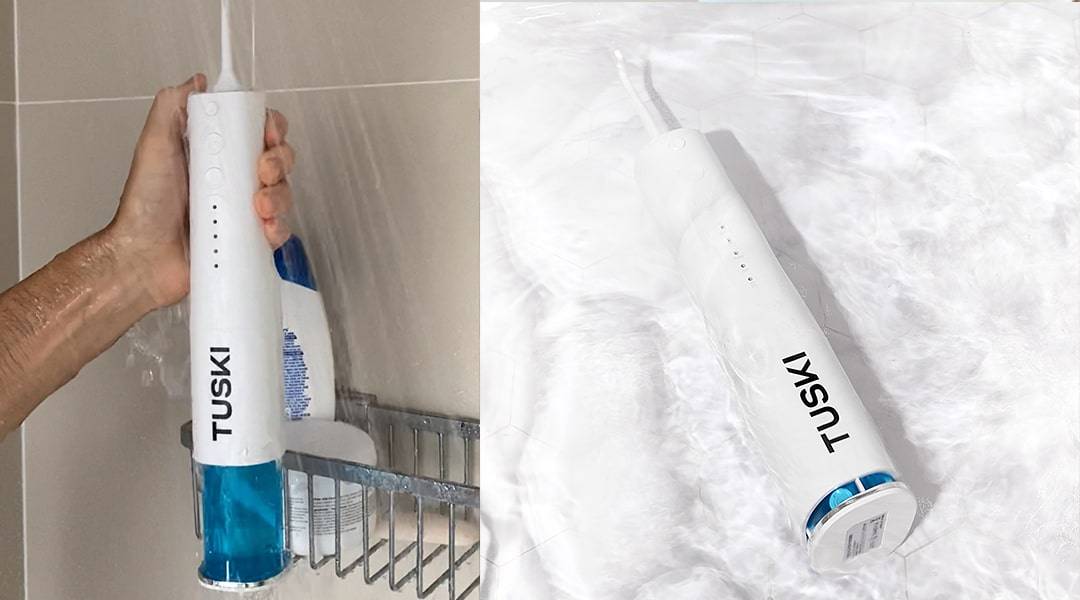 It’s waterproof, so you can use it in the shower and save even more time.

This also means that you won’t have any issues adding it into your routine.

It's USB Rechargeable, Portable and Comes with a Carry Case 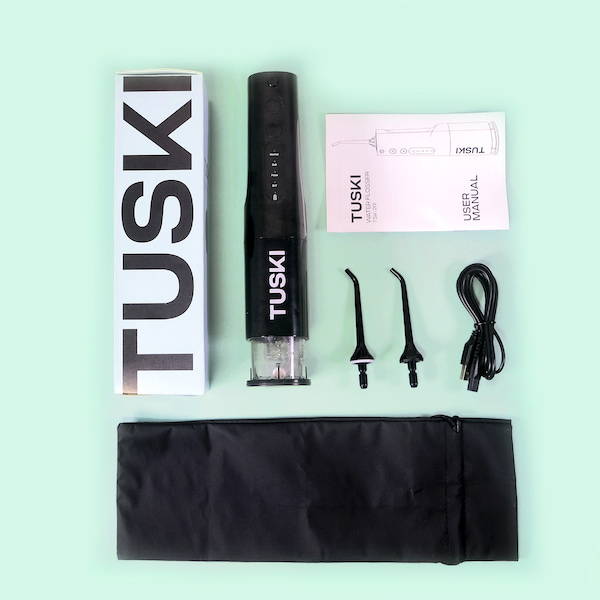 The Tuski Water Flosser is USB rechargeable. The charging time takes 4 - 6 hours and the usage time for 1 charge lasts between 15 - 20 days.

It also comes with a carry case and two additional replacement tips.

Take a look at what some people have been saying about their Tuski Water Flossers...

"I used to hate string flossing but my Tuski Water Flosser has completely changed the game. Flossing only takes me 30 seconds now. My teeth are whiter than before too!"

"I got the Tuski water flosser for my husband and he loves it. He used to struggle with flossing regularly but he now enjoys it and really became a habit."

"I'm completely hooked! Never thought I would love "flossing" that much. I can't recommend this enough. Don't hesitate, just buy it."

Where can you get Tuski?

Tuski Water Flossers are only sold on their website at tuski.co

Right now they are offering a one-time-only 30% discount on their own site.

*Update: Ever since Tuski was featured on news websites, an incredible amount of buzz has been generated and has since sold over five thousand Water Flossers. Due to its popularity and positive reviews, the company is so confident in their product that they are now offering a free 1 Year Warranty and are extending their one-time discount of 30% off and free shipping. 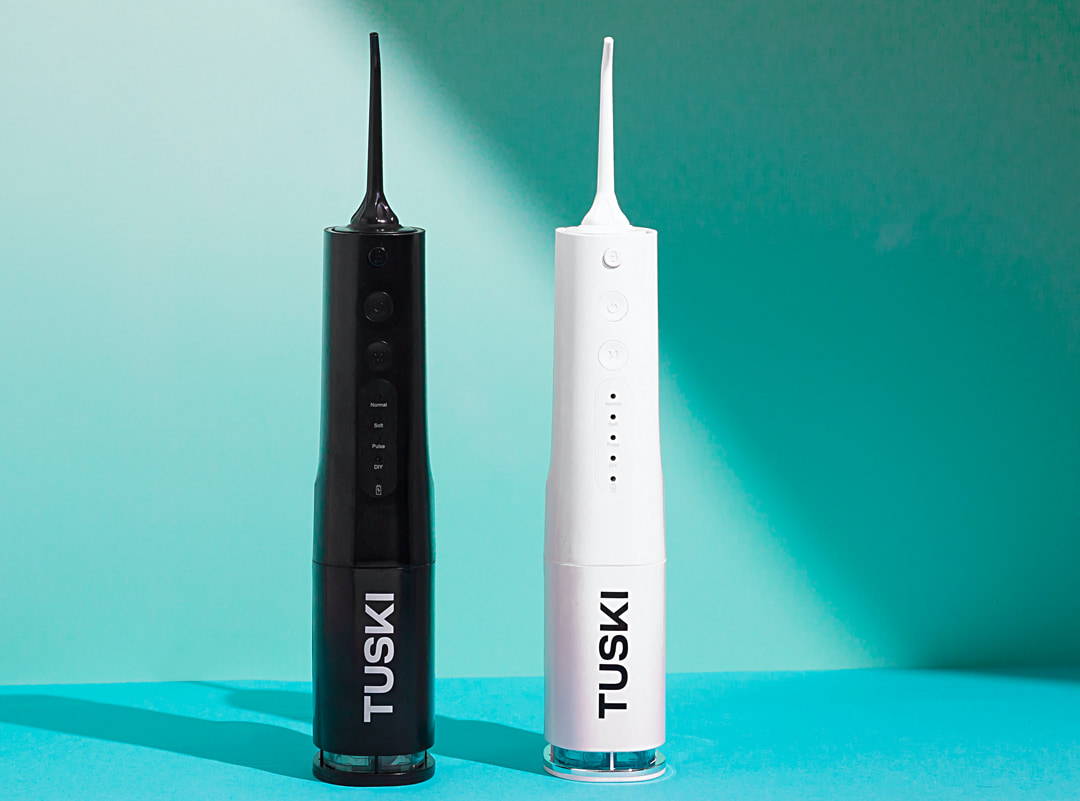 GET 30% OFF + FREE SHIPPING FOR A LIMITED TIME ONLY!

As a special introductory online exclusive sale, the company is now offering 30% Off + Free Shipping to all new customers.

The Tuski Water Flossers have received a lot of publicity so we suggest taking advantage of their sale while supplies are still available.

GET YOUR TUSKI WATER FLOSSER NOW!

Click the link above to see if Tuski is still offering 30% off discount and Free Shipping!